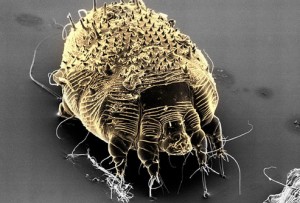 Sarcoptes scabiei goes through four stages in its life cycle: egg, larva, nymph and adult. The life cycle starts, when an adult female gets in contact with your skin. It crawls to crevices such as elbows, feet, fingers and genital area. It penetrates the skin and burrows a tunnel. It can slice skin with its sharp front legs and mouthparts. The other legs it uses for holding on to the skin with suckers on each leg. It has eight legs in total. It takes about 30 minutes for it to burrow into the skin. It then continues to drill horizontally across the skin laying eggs along the way. The tunnels are usually shaped in a zigzag on the skin surface. It lays 2–۳ eggs per day for two months. Then it dies. Six-legged larvae hatch from the eggs within a few days. They find hair follicles where they feed and molt into eight-legged nymphs. In order for the nymph to become an adult male it molts once. This takes about ten days. To become a female it has to molt twice which takes about 17 days. Since the nymph has more time to eat and grow the females are larger than males. Female Sarcoptes scabiei is 0.25–۰٫۳۵ mm wide and 0.30–۰٫۴۵ mm long. Males are about half of that size. Mature female and male mate only once. The sperm keep the female fertile for the whole two months that it lays eggs. Males do not usually burrow into the skin but only crawl and feed on it 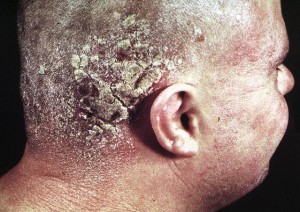 The movement of Sarcoptes scabiei and eggs inside the tunnels cause local inflammation. This allergic reaction causes very intense rashes. People who have never been exposed to scabies develop allergic response within six weeks. Those who have had scabies previously will get the rash within a few days. On average there are only a few fertile female mites per infected person. These kind of infections can be harmless and the victim might not even notice it.

Scabies spreads easily through skin-to-skin contact. Mites can also crawl long distances. If you scratch an infected area, they get inside your fingernails. Then if you touch common objects like laptops, the mites can drop there and infect others.

Diagnosis is done by finding mites or their tunnels. The infected area is usually scratched so much that the common s-pattern is not shown clearly. The tunnel can be revealed with ink or topical tetracycline solution. Your doctor applies it on your skin and then sweeps it off with an alcohol pad. Living mites can be identified under a microscope.

To get rid of Sarcoptes scabiei you need to wash your whole body with Sulfuric soap for a few days. To relief itching during the treatment period use antihistamines such as chlorpheniramine. Your entire home needs to be washed. If you have pets, wash them too and have them checked by a vet. Common objects such as computer keyboards can be frozen at -20 °C for a few days to kill the mites.

People who already have other diseases and thus weakened immune systems can develop crusted scabies (also known as Norwegian scabies). It is characterized by thousands of mites causing severe itching and rash. Norwegian scabies is treated with oral dose of Ivermectin which has some severe unwanted side effects.